20 Years Ago: Supporting Frederick Together 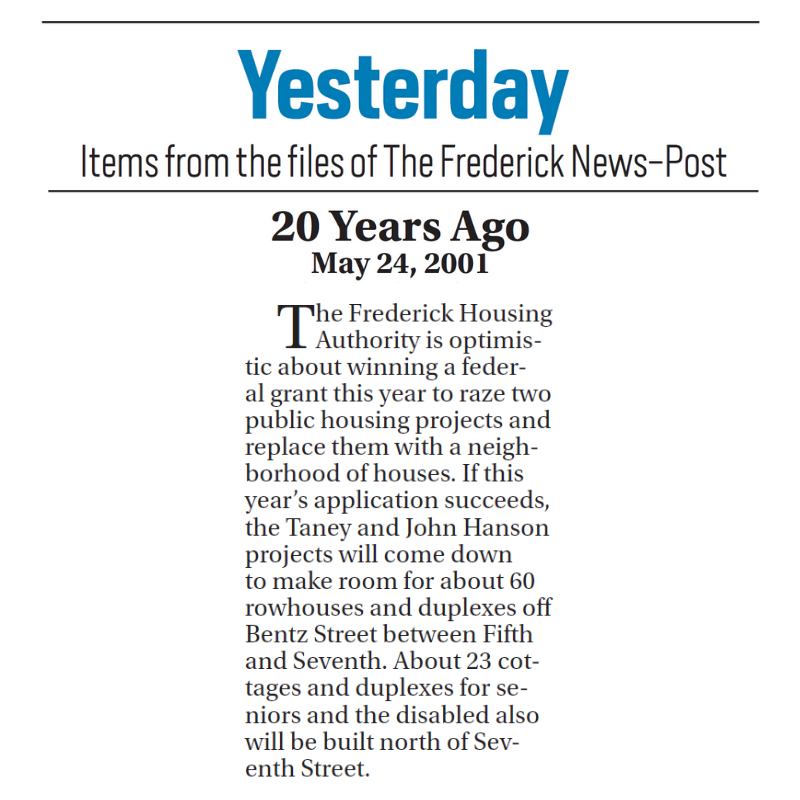 Even 20 years later, the Ausherman Family Foundation (AFF) is still rooted in partnering with the community to move Frederick forward for all. An early example is the HOPE VI project with The Housing Authority of the City of Frederick to develop a mixed-use community. AFF wanted to help move the project forward but anticipated potential roadblocks due to past challenges. To complete the project quickly and efficiently, The Ausherman Family Foundation supported a consultant and helped form a network of community members who were interested in helping to modernize and revitalize downtown Frederick. Members included government officials, foundations, community leaders, local businesses, and nonprofits interested in housing issues. The group’s goals were to build consensus around the housing redevelopment plan, work with the Housing Authority and deliver the message that the project should be a “go” to local, state and federal politicians. This network resulted in the formation of a public/private partnership which stimulated additional community support.

The project plan included tearing down 146 aged public housing units on North Bentz Street, resettlement of residents and building in new decentralized low-income housing with homes and apartments spaced throughout the city. The HOPE VI federal project made the new sites available to people with a variety of incomes including federally subsidized housing alongside affordable and market-priced townhomes. It also included the new community center, Bernard W. Brown Community Center, which opened in 2007.

In 2003, the Housing Authority received a $16 million grant from the U.S. Department of Housing and Urban Development authority (HUD), thanks in large part to the public/private cooperation. Once the grant was in order, the community group continued to meet to find sites suitable for development. Sites were donated by the city and by local groups such as the Interfaith Housing Alliance.

Looking back, on the success of that project and all that was accomplished because of community collaboration, Ausherman Family Foundation is honored to have participated in such a significant project for our community. Today, we continue to seek out opportunities to work in true collaboration with others to achieve stronger impact. Similar projects with the same collaborative model have resulted over the years, recently with the Downtown Safety and Services Initiative. Networks are beginning to form to tackle issues around Trauma Response and Transportation. As we continue to have an ear on the ground to true community needs, several projects are in the works

Check out other happenings and interesting news related to the Ausherman Properties and Frederick County.